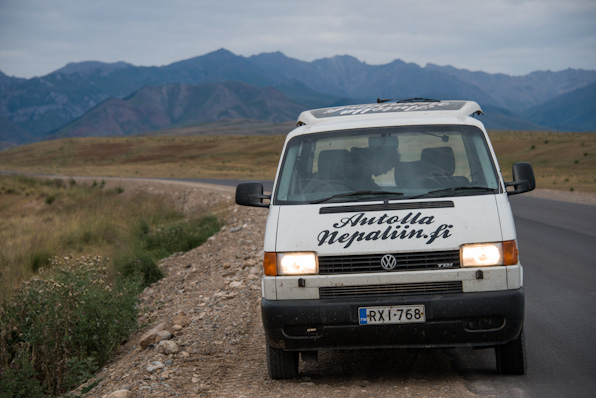 We got up quickly, wiped the sleeping sand off our eyes, and were ready to hit the road quite fast. As morning exercise, the Heffalump had to climb from 2000 meters to 2600

meters in less than fifteen minutes, after which it was a long steady downhill drive in a valley towards At-Bashi.

The At-Bashi valley in the morning is possibly one of the most gorgeous sights I have ever seen. The road down to the bottom of the valley was a wonderful even mass of asphalt. On the left side we had the purple mountains with snow covered tops and on the right yellow and red hills covered the horizon. At the bottom of the valley lush green grazing land spread out in front of us as far as the eye could see. Sunbeams shone through clouds as if through a heavenly sieve. 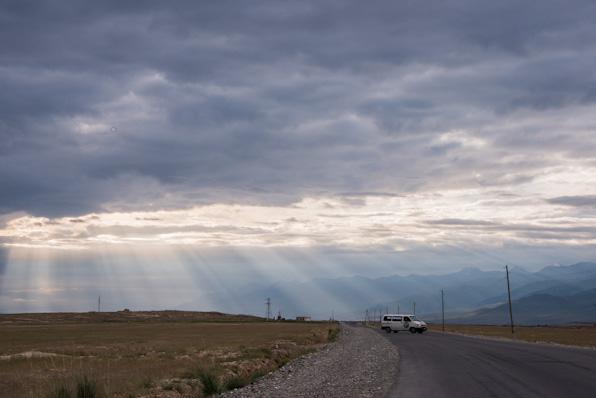 We drove through the At-Bashi valley in an hour, after which the road started to climb up towards the Torugart Pass. The road was still perfectly evenly paved with asphalt, made by the Chinese. The Lump made steady progress and we passed tens of trucks that were on their way to the border. 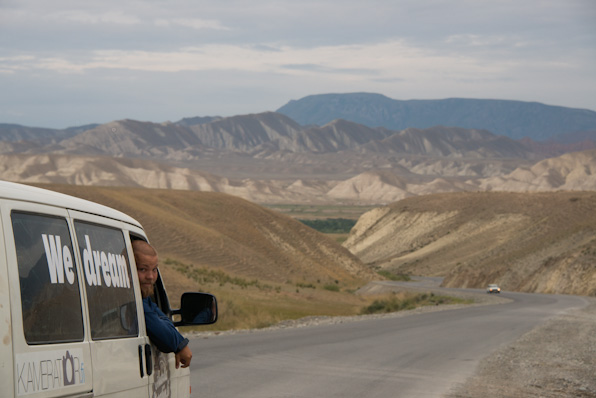 Our gentle ascent was only interrupted by the Ak Beyit Pass, after which the terrain changed into a steady uphill climb all the way up to Torugart. 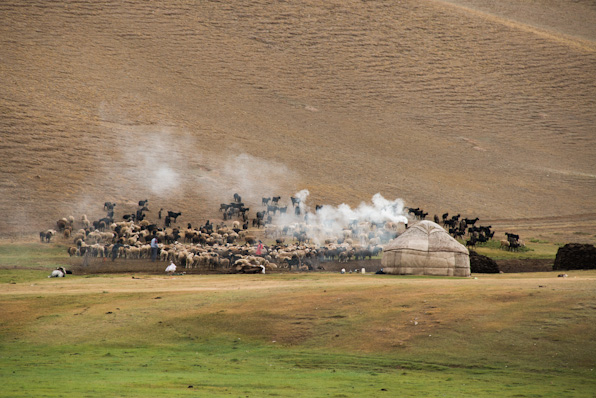 As the Pass narrowed, we started seeing more yurts (tent dwellings local people live in) closer to the road. It was interesting to catch small glimpses of a life style that is totally different from ours. Children participated in the busy everyday life of the family by selling fresh milk at the side of the road, by herding sheep or working on the yard. 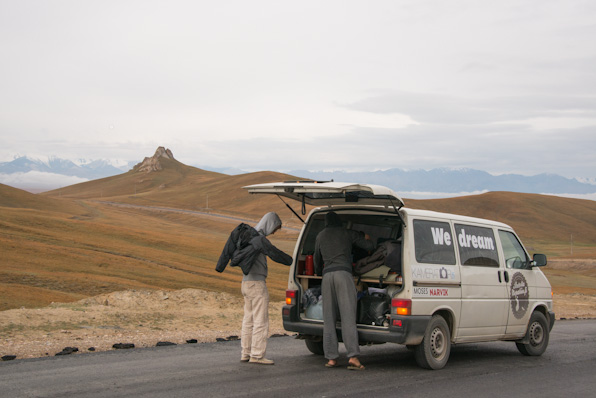 In the pass we had to put on some more clothes because the air had cooled off so much that we could see our breath.

Pretty soon we arrived at the first Kyrgyz check point, where we had to explain to a soldier who was carrying an assault rifle, why each of us had two passports. After examining our documents for a while, he let us pass and continue our drive through the Tuz-Bel Pass. 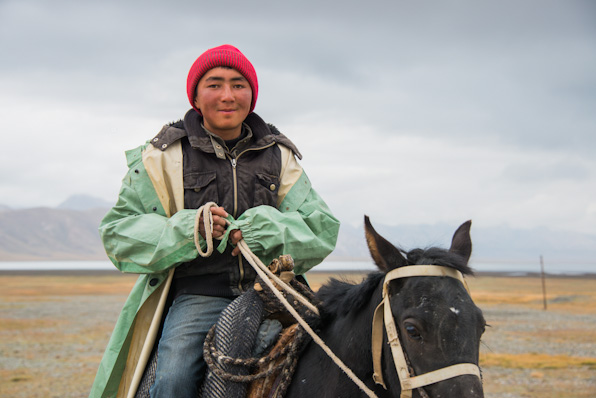 Very soon the Torugart plain opened in front of us, at the altitude of approximately 3500 meters. The plain is dominated by a mountainous horizon, the Chatyr-Köl lake and the muddy gravel road that had more holes in it than a typical teenager’s jeans. We spent at least half an hour driving ten kilometers on the gravel road. Along the road we again saw children herding goats and selling milk. 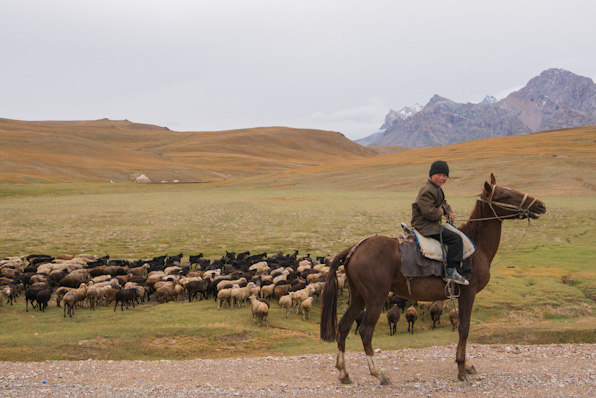 Our first drive off the road

About half way through the muddy road we had to take a potty break (the bumpy road added to our need to go). I drove to the side of the road in order to stop there, when all of a sudden I noticed that the road underneath us was vanishing, and our van was pointing down at a 30 degrees angle.

I quickly turned the wheels towards the steppe that stretches out next to the road, and stepped on the gas as hard as I could. Suddenly we had left the road, and found ourselves on the grazing land. The van was still standing. I didn’t trust the ground beneath us, and so I kept the car moving so that it wouldn’t start sinking. Our main priority was to get back on the road. 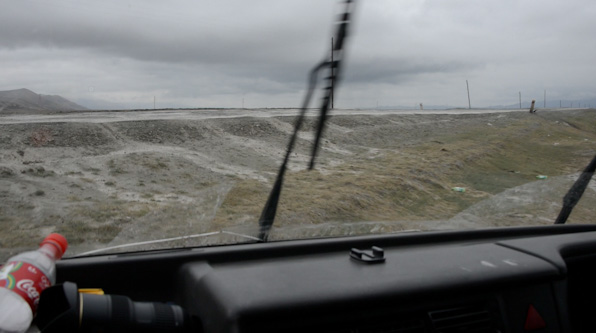 We heard loud scratching noise as the rocks on the ground tickled the Lump’s belly. However, we made it back on the road, and didn’t drive off on the other side, either. So we could continue forward.

At the border we were met with a line of 200 trucks. It would’ve taken us the whole day to stay in line behind them so we decided to try the local and Kazakh approach: smaller cars can pass trucks at borders. 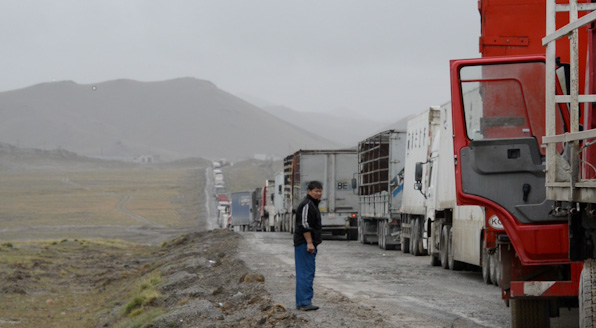 We were cruising along the opposite side lane past the trucks. Much to our surprise, the truck drivers waved at us, made way for us (the road wasn’t always wide enough for us to pass them) and seemed to be in a cheerful mood in general.

We reached the border crossing station in no time. The big soviet era building was dreary and sparingly furnished. We were surprised by the Kyrgyz officials and their warm welcome and amazing helpfulness. Very soon paperwork had been filled out for us and we could continue towards China.

The next blog post will be about China, so we’ll continue from the border next time.