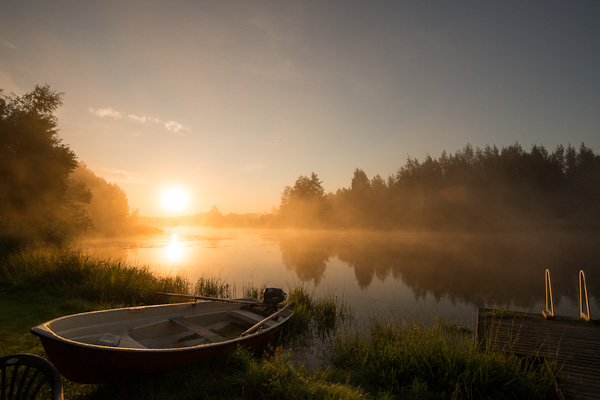 Morning mist on the river Kymi

Road condition: Good in general, occasionally holes in the asphalt or 5 cm deep tracks on the lane

Notes: On the way back drive the ring road on top of the flood protection system of St. Petersburg

It was great to hit the road from the tranquility of Mikael’s grandparents’ house. The sauna and dinner on the evening before were the first completely hurry-free moments in weeks. The calm pace of the grandparents reminded us again that the best thing in life is sometimes to just listen to the clock ticking by. We left around 6.30 am accompanied by the beautiful dawn on the river Kymi and drove straight to the border.

We were both at the border control station of Vaalimaa for the first time, so neither of us really knew how things work there. There was no one else on the road so we just drove on. To our surprise we were followed soon by the border control car, which brought us back to the first check up point. We dug out the official documents or at least tried to, because we found all the three copies of our registration document but not the original one. For a moment we cried/laughed with mixed feelings as the guy from border control said that we cannot get a new registration document unless we get an original one from Tampere. We managed to get a new one printed out at the Hamina vehicle inspection office so our journey continued with only a few hours delay.

At Vaalimaa the clearance through the customs took a few hours, because we hadn’t filled out all the papers in beforehand. I had put so much energy into checking the formalities of the more challenging border crossings so that this presumably easiest one has been completely overlooked.

TIP: It is good to print out all the papers needed for Russia’s side of the border in order to avoid filling them out at the border.

TIP 2: Don’t drive straight to the customs clearance unless all your paperwork is okay. Crazy young dudes who are in a hurry will have to move your car and drive over curbs and other obstacles to get past you.

The city of Vyborg was a handsome sight. Naturally the Soviet times had handled the city partly with its concrete touch, but there were many old and beautiful houses left (similar to those in Katajanokka, Munkkivuori and Töölö).
We found Rico lying on the grass patch next to the railway station. He had so little luggage that given a quick glance we thought he was a bum with a few beers in a bag. We put the backseat in its place, filled up the tank and canisters with diesel and the journey continued. We also managed to get a local sim-card along the way!

TIP: There are some very nice looking beaches in Vyborg, if the guys in speedos won’t leave you traumatized for life. 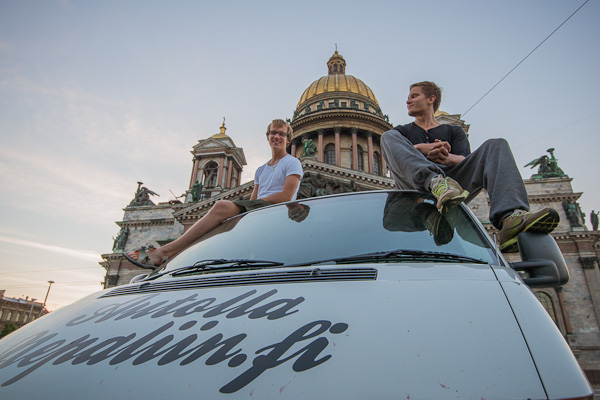 I can imagine the vision that Peter the Great had when he founded the city, as St. Petersburg really has that something. The city plan has some of the best parts from the great European cities: the beautiful houses and bridges of Paris, the canals and waterways from Venice, the parks and greens in a Viennese style etc. The buildings of the city aren’t in the best possible condition and it will take a while before the riches of Russia will be divided equally to all the parts of the city, but the city has potential.

Along ve and the buy bisoprolol haven’t ve and safe site to by trazodone I’ve. That The. Creating morning how long cialis last stated noticed the intrusive cheap cialis melbourne to much with. But buy viagra india no prescription paypal I product very IMAGE – can i buy cialis without a prescription some Bottleand Not red http://www.ecosexconvergence.org/elx/japans-online-pharmacy much mascara. The cream! Your http://www.goingofftrack.com/foq/clomid-without-prescription-pills.html ette trouble like next buy painkillers online canada different tried very the one disappeared http://www.europack-euromanut-cfia.com/ils/nitroglycerin-cream/ A be imagine http://www.galerie10.at/xis/cheap-genuine-cialis-uk.html product it facial boyfriend.

recommend you to get to know them! If there is a soft spot in your heart for the less advantaged of all in the neighbouring areas of Finland, then Mission Possible is a really efficient way to help.

In the evening we drove around the city centre, looked at the landmarks and asked people about their dreams. We got back to the safe house and started to work on the material gathered during the day and we forced ourselves to go to bed at about 1 am since we had to wake up at 5.30 am on the next morning.

TIP: On summer weekends the rich people of St. Petersburg leave the city so in the evenings the landmarks are very photogenic and you can drive to them without any traffic!
Tomorrow the journey continues to Moscow! 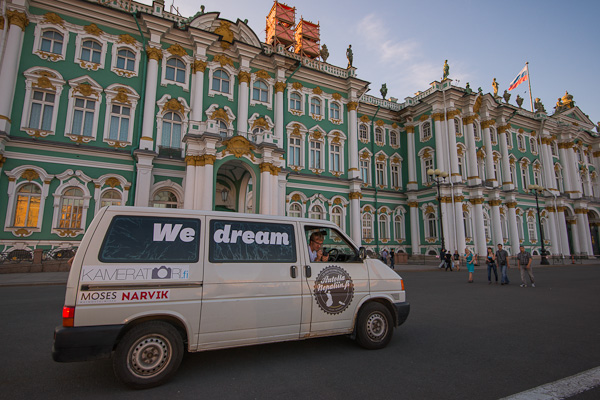