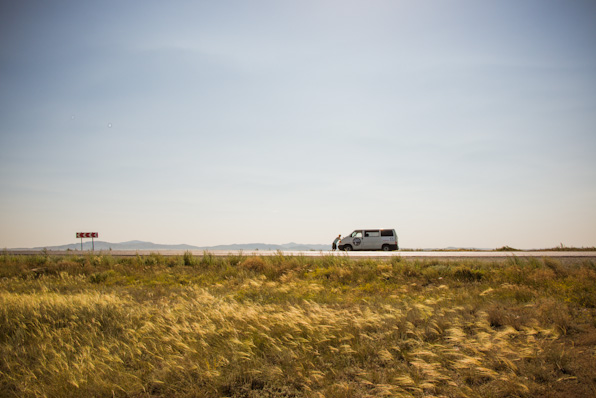 We woke up to a morning in Astana, aiming to be at the Finnish Embassy by 9 am. From there we collected our double passports, which would help us continue to Kyrgyzstan and China. It was a beautiful and sunny morning (as it usually is in Astana), and the view over the city from the embassy on the 17th floor was magnificent.

During the morning we went sightseeing in Astana, taking pictures of monuments and buidings, which were probably some of the finest of the journey. Astana has an architecture all of its own, and I at least found it extremely attractive. In Astana you feel to have landed on a different planet, just like in Star Wars. The buildings are constructed from the same materials as everywhere else, but the shapes, colours and lay-out are very far from the familiar. 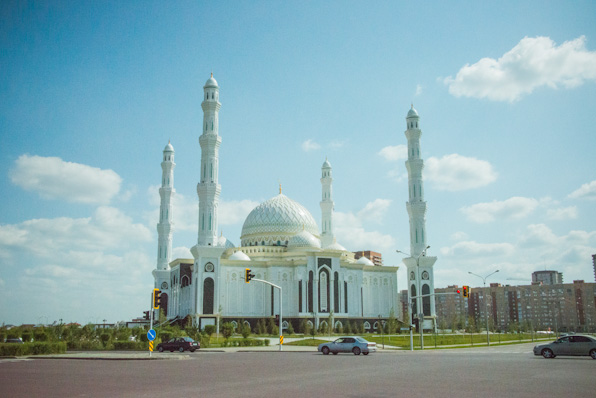 Finally we started driving towards the south, to our furthest destination so far. We turned the nose of the car towards Bishkek, the capital city of Kyrgyzstan 1 200 km away. The road was a continuous two-lane road, which enabled a speed of 80-100 km per hour. Due to the sightseeing tour of Astana, we left only at midday, and we knew already when we left that we would not make it to Bishkek before dark. 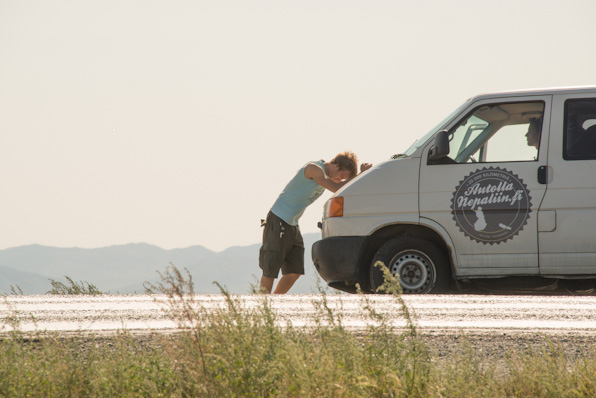 As soon as he woke up, Mikael knew that there was something wrong with his body. Feeling feverish, headachy and slightly dizzy kept Mikael out of the daily routine for two days. It seemed to be just a case of slight dehydration, but the guy was completely nagged, so we could not be sure what the matter was. 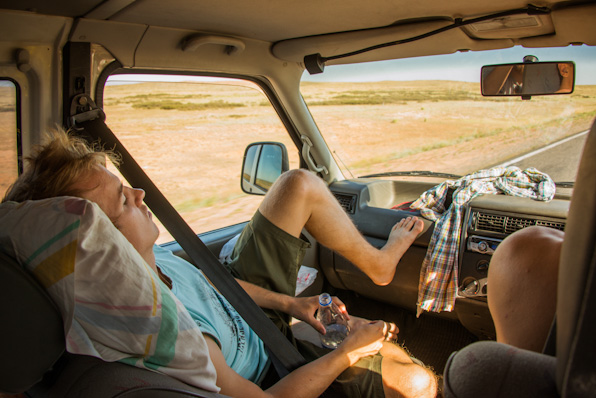 We took it in turns with Rico to drive as long as we could, but we were still only halfway through Lake Balkhash, when darkness crept around us. The nearest city, which we knew would have accommodation, was 500 km away. The road was good and smooth, but we knew from experience that in Kazaksthan, even in the middle of a good road, there could suddenly be a hole or a crack, which brings the journey to a halt. We did not want to continue the journey, but could not excactly spend the night by the roadside either. Also, Mikael’s condition remained unchanged, and the uncertainty of how his condition would develop, bothered me.

At times, in life we find ourselves in situations, in which none of the available options is to our liking. This was one of those situations. If we tried to go to a side-road and hide for the night, we might manage without any trouble, if not, we would have no shelter. Or if we stopped by the roadside, we would at least be visible, but then we would have to trust that passers-by had no bad intentions. Another option would be to carry on the journey behind some Kyrgyztan lorry, hoping that we could get safely to the border. Even though we would have to drive until two or three in the morning. 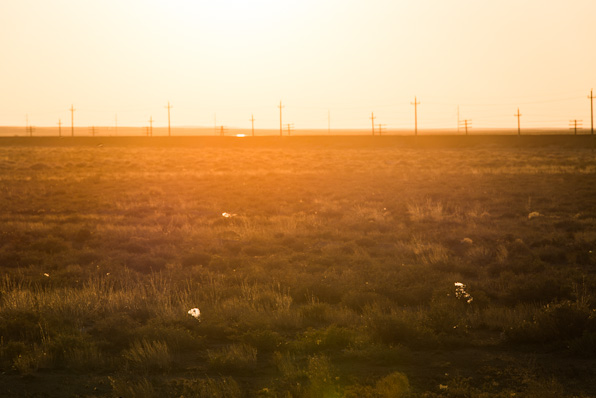 We decided to carry on behind a Kyrgyzstan lorry. Changing drivers was out of the question, because the lorry would have run away and I started to be tired of driving.

After the first hour of pacing, we were already seriously thinking of stopping by the roadside.

According to the map, there would be no habitation for the next 140 km, apart from tiny villages, which would mean another two hours’ drive at the speed of the lorry.

Then, all of a sudden, in a tiny village, there were three 24-hour petrol stations next to each other. Obviously, there were people filling up on this main road, even though there were hardly any locals. At the tidiest looking station we asked, if we could sleep outside it. That was all right, and we could retire feeling reasonably safe. 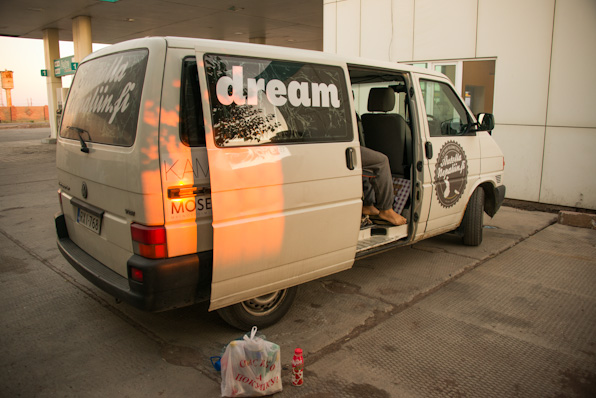 We wanted to get to Bishkek as soon as possible, as our second day in Kyrgyszia would take us through the imposing Torugart Pass, which we wanted the locals to tell us more about. This border crossing is said to be one of the most complicated border crossings in the world. It is situated at an altitude of 3 700 m and can be crossed only by car (not by public transport or by foot.) In China the border crossing is open only to Kyrgyszians and the Chinese. The condition of the Pass was also a big question mark, since there was many kind of information available, on the net and guide books. The altitude endurance of Muffalump or for that matter of the drivers had so far never been properly put to test. 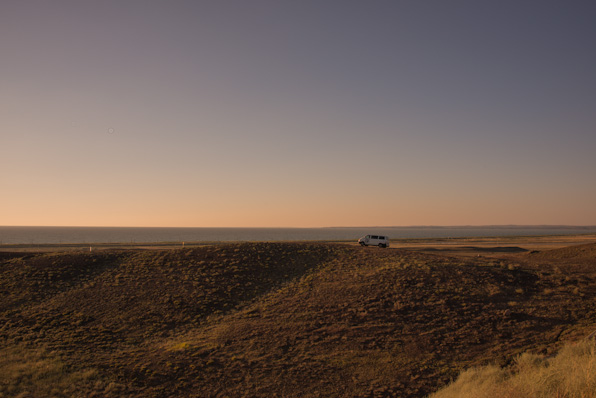 We woke up aat 5:30 just to realise that it was still dark. After a few prolonged catnaps, the morning started to break and, guietly, I moved over to the driver’s seat. Rico and Mikael were still asleep in the back bed of the van, when after two hundred kilometres we stopped at the next petrol station. Bishkek was just over 350 km away. 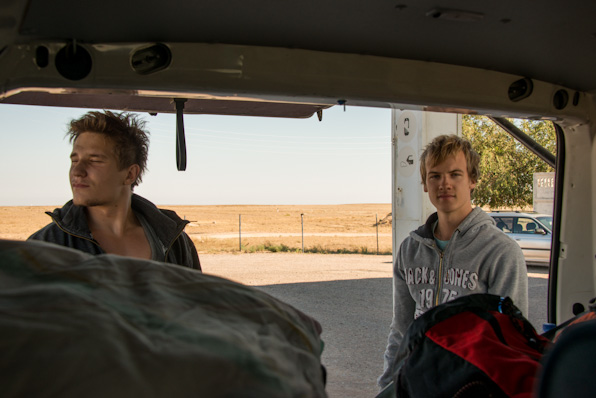 When approaching the main road leading to Kyrgysztan, we saw a chain of mountains with snowy tops emerge in front of us. After the endless flat fields, steppes and desert it was unbelievable that suddenly in front of our eyes, there were mountains for over four kilometres. 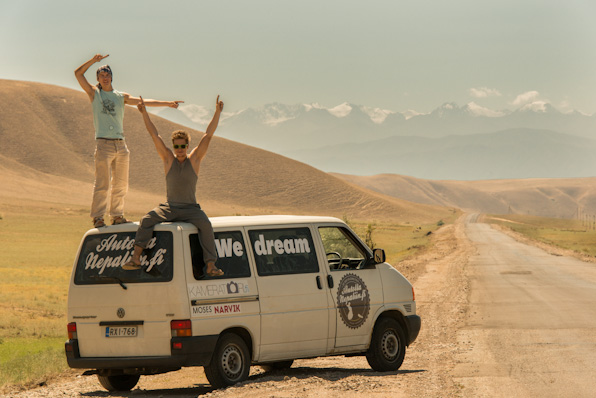 We crossed the border at a frontier station on the road from Alma Ata. On the side of Kazakhstan the border clearance was surprisingly complicated. Kazakhstan, Belarus and Russia have signed a Customs Convention, which allows goods to travel freely. Because of the Customs Convention, when we left Kazakhstan they asked us for the Customs clearance document which we had filled in when we left Russia. We did have the document, but because three copies of it were required for the customs officials, I had to go back to town to look for a photocopier.

Rico and Mikael had made it to Kyrgysztan easily by foot, but I was still sorting out all sort of paperwork and stamps to do with the car in Kazakhstan alone. In the end, crossing the border was relatively easy, as everybody was really helpful. In Kyrgysztan the entrance was like ”Stamp the passport and let through”. The documents of the car were not even looked at.

It was a twenty minute ride to Bishkek from the border, but already in that time you could notice a big change in the driving culture. We knew, that the traffic would become one degree more chaotic at each border crossing, but it takes always a few hours’ drving before you start to have even the faintest clue of the traffic in each country.

In Bishkek we spend a peaceful day and leave towards the trip’s first really big challenges and big sights. 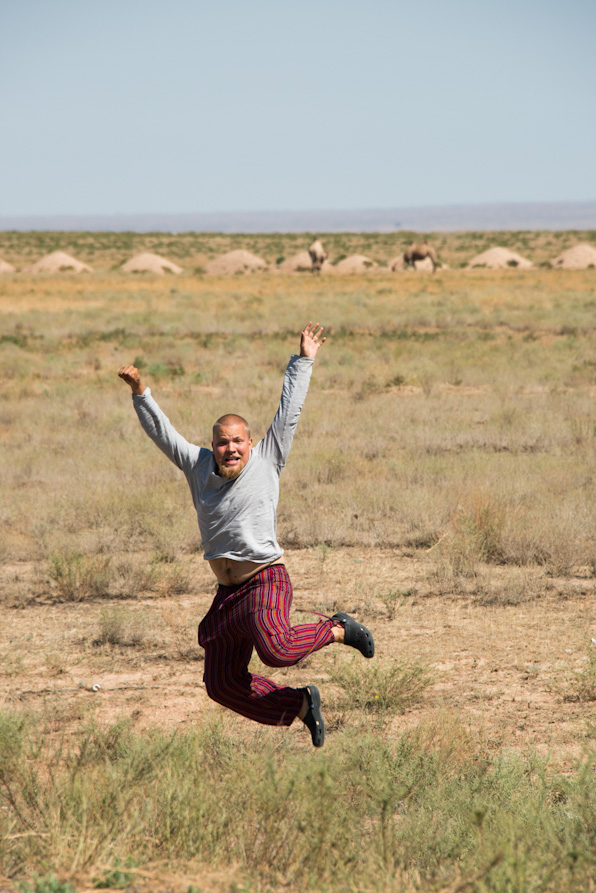 PS. Oh yes, we saw the first camels of the trip today. Oh boy, we are far away!