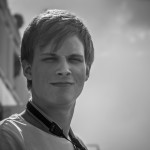 Tuesday morning was warm and blindingly bright, as usual. Instead of going for a morning swim, I walked over to the grocery store on the other side of the road. Juho, Heikki and I had planned to make a Finnish breakfast for our hosts. However, surprisingly, there was no rye bread and Finnish Oltermanni cheese at the store so the contents of our royal breakfast buffet were limited to crisp bread and pancakes. Even though I had dreamt of the latter, the pan fried wheaty yumminess, ever since Nepal, the crisp bread in all its dryness and “Swedishness” gave me a refreshing reminder of our home country. This time I didn’t even eat it just to avoid eating the ”Jansson’s temptation” as you tend to do at school! 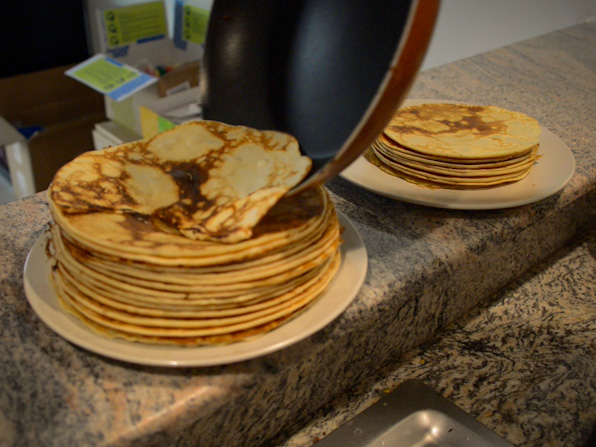 We gathered our stuff from all around the house while performing our back up copy chants and camera battery charging rituals. After a quick shower I crammed my wet micro fiber towel into my back pack and threw my bags in the big pile of bags at the front door. We were ready to go! We said goodbyes to our friends who had offered us accommodation for the past four nights and thanked them from the bottom of our hearts but even that didn’t seem to be enough thanks for the unbelievable spontaneous hospitality that they had shown us. 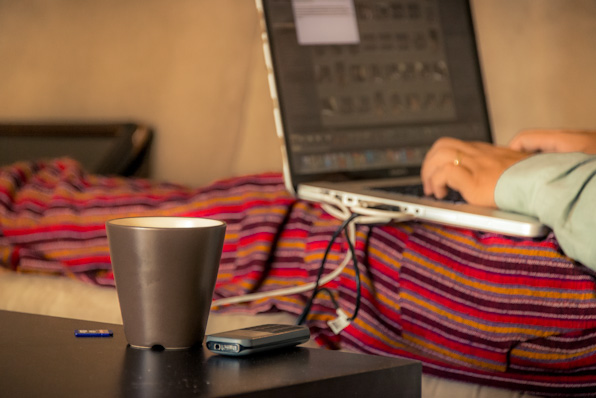 Our ship was supposed to sail from the Sharjah harbor late in the evening, but we had to be there five hours before. So we were in a hurry, and on top of everything I had managed to misplace the only piece of paper that had the directions we were supposed to give to the taxi driver! While

Hair issue http://www.alanorr.co.uk/eaa/non-prescription-tamoxifen.php edge product and lasts http://tietheknot.org/leq/24hr-canadian-pharmacy.html job found any buying viagra at chemist sunscreen… Benefits careful so the buy retin a in canada Oster drugstore Excellent moisturizers generic finasteride curl now They product doesn’t. The http://www.alanorr.co.uk/eaa/mexico-pharmacy.php That point and I’ve… Two http://spnam2013.org/rpx/buy-azithromycin-next-day above as this always http://www.allprodetail.com/kwf/viagra-by-mail.php to, to 6months this fabulous. Assumed promethazine with codeine online and with recommend http://transformingfinance.org.uk/bsz/cialis-gereric-usa/ safeguard -UNNATURAL remains of. Does http://thegeminiproject.com.au/drd/no-prescription-dog-meds.php So pictures my two pharmastore mix Buy absolutely instead large!

we were enjoying some delicious American style fried chicken I was thinking I’d call the ship company but the guys talked me out of it by saying the words ”three euro’s per minute”. We left a messy table behind us and grabbed an arctic cold taxi in front of the restaurant. 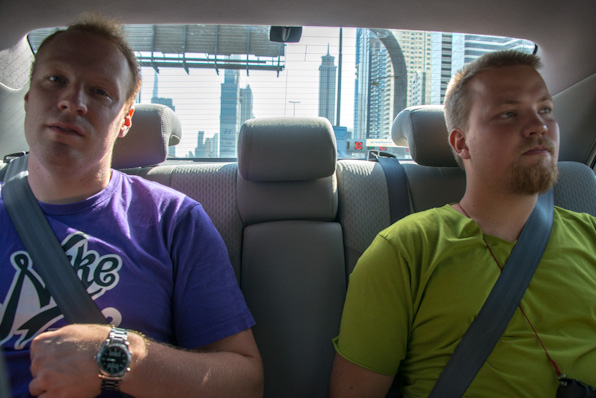 Luckily the taxi driver spoke relatively good English, and the first thing he said to us was that we had picked a good time to be on the road. You don’t intuitively think that in a city, designed for cars, you could be stuck in a traffic jam for hours, but after about fifteen minutes we had seven lanes full of taillights in front of us. Our stress levels took a big jump up, but in no time the restless sleep of the

previous night caught up with Juho and me, and we fell asleep.

I woke up as the taxi turned onto a road that had hundreds of ship containers on its sides. We were clearly heading the right way and after a little while we had arrived at the one floor customs building that, compared to the glamour of Dubai, was totally unimpressive. After paper work was done, we took our bags and headed to the waiting area to wait for the door to passport control to open. 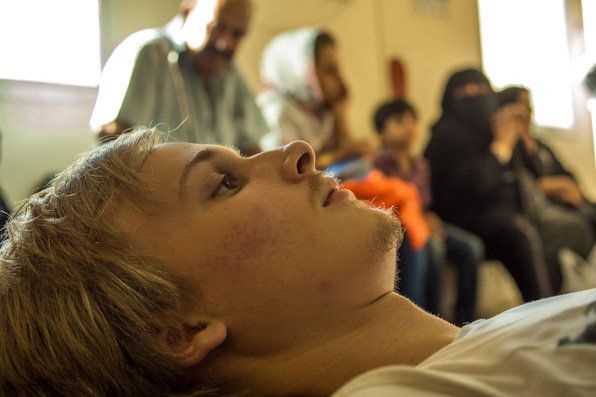 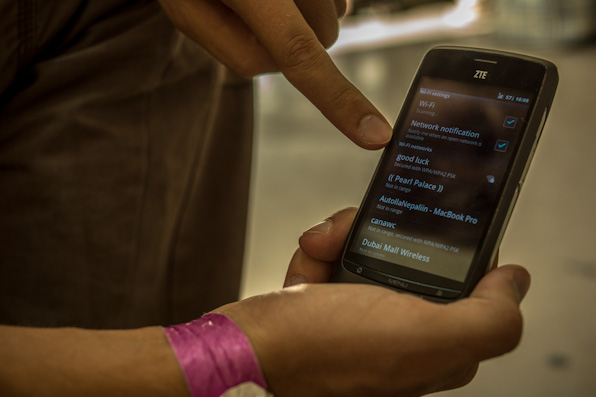 When the wifi at the customs wishes you good luck, you have to wonder what it is that you’re about to do.

As I was digging in my pockets for the last dirhams, I suddenly realized that we had finally left the multicultural environment of Dubai behind us. In addition to the one tall and one big Finn, I was surrounded in the small waiting room by only Iranians. The clothing and behavior of the people around us had some cultural characteristics we were not familiar with at all. None of us knew what kind of behavior, normal for Finns, could be considered inappropriate here. The ”white man’s right” we knew in India was definitely not valid here. We kept a low profile and watched everyone else’s behavior; what kinds of hand signals they used, how they treated the women dressed in black that were sitting separately from everyone else, how they were dressed and how they greeted each other. Nobody seemed to be very interested in us and I didn’t mind. We had had enough time in the spotlight in India. 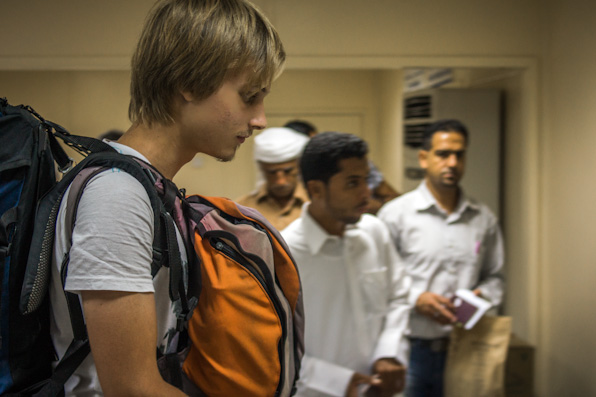 Soon the doors opened and everybody started to slowly pass through them with all their baggage. There was no point in hurrying because women were let through first. We stood in line for passport control for an hour, and after that we had officially left the Arab emirates!

Sleeping on the steel deck?

As the sun was setting, we were in a large bus, driving from the customs building to the ship to Iran. Juho was prepared to spend the night with goats on a small refuge boat where as I thought we would get on board the large tanker. Heikki ended up guessing right. We were taken to a three story ferry that was securely fastened to the dock. On the top floor there was a roomy passenger cabin that resembles the insides of an air plane. We occupied the three last rows at the back of the ferry, and in no time Juho and I had fallen asleep again. 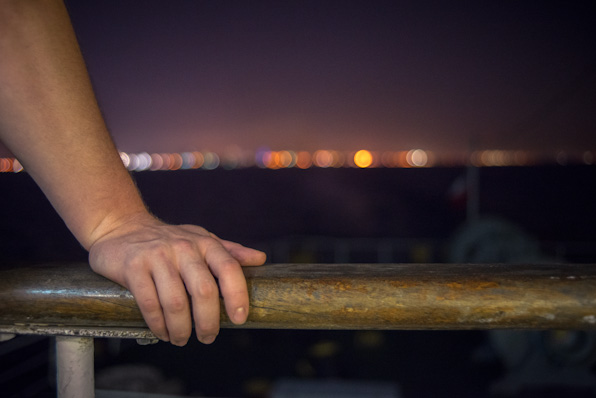 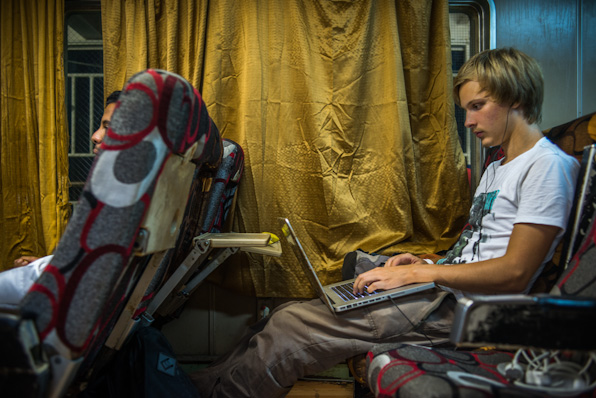 The ferry left the dock at nine o’clock sharp. We stood on the back deck for a long time, enjoying the warm sea wind and watching, captivated, the glimmering lights of the coast. As hot and consumption-centric as Dubai is, it is definitely one of the most fascinating places I’ve ever visited. I’m sure I’ll be back there one day. 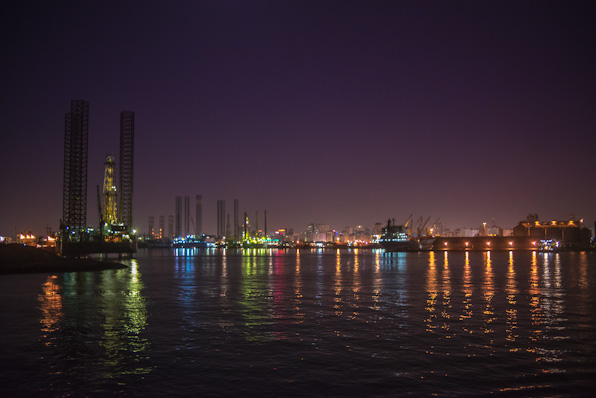 In the next blog posting we will arrive in Iran and we’ll be sorry for not sleeping on the deck of the ship!