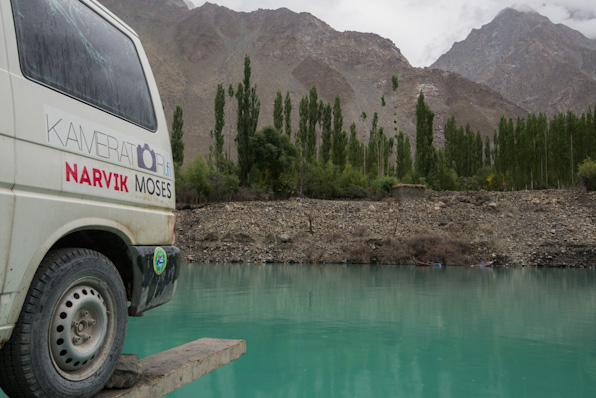 As if by miracle, I felt much better in the morning. I took the first driving shift and we started soaring towards the ferries. 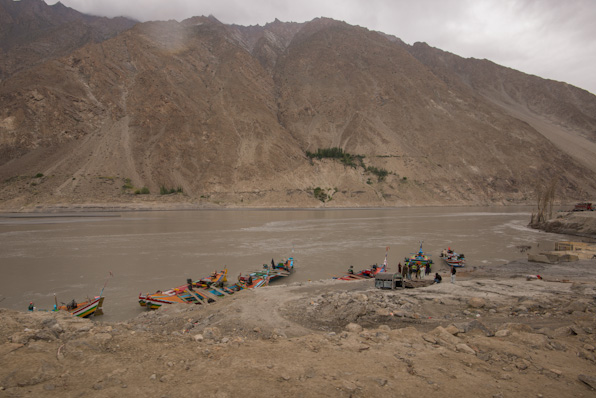 We came to a cove with small passenger ships – small wooden boats which seemed like they’d been bloated with steroids. Apparently the boats had been brought there by lorries after the 2010 earthquake formed a lake there.

We were about to drive past the cove, when we figured to ask the locals where the big boats are. The locals only stared at us and pointed to the boats on the cove. ”No, no, where are the big boats for cars?” And still they gestured towards to cove.

Then we saw that the bigger boats (only twice the size of the Heffalump) had big planks crosswise on top of them. The gravity of the situation dawned on us. Suddenly we were in no hurry and we let the Italians pass us. 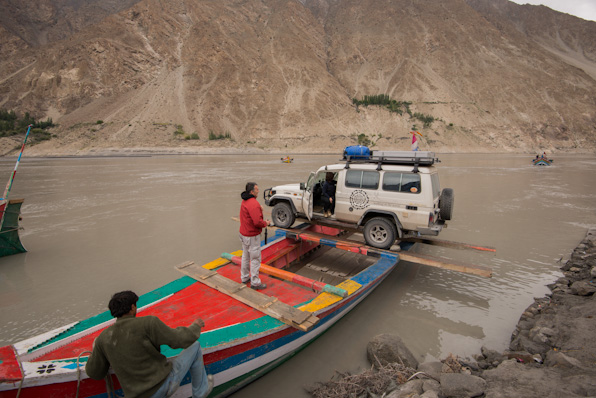 By no means was the ferry an enticing alternative, but the only other option was to head back to China – and note that Mikael didn’t have a Chinese visa. The cars had to be driven to a boat along a steep bank, and someone told us that just last week the boys on the ferry had caused a car to tumble into the lake, for good. 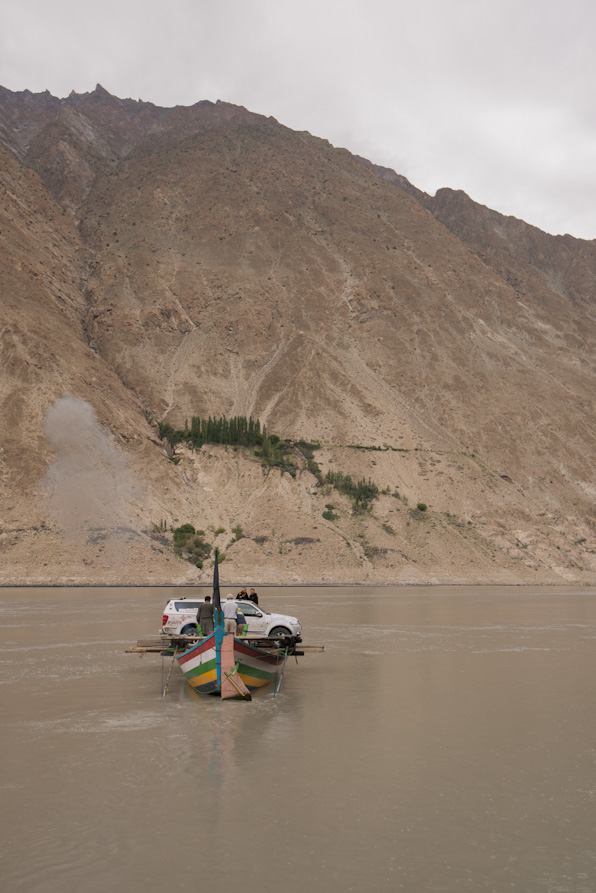 The Italians seemed to load up their cars on a boat fairly okay. The boats swayed from side to side, but they stayed afloat and eventually disappeared around a bend. Then became our turn.

We managed to bargain the ferry trip to cost 170 euros, but it was still an unreasonable prise for a 17 mile trip, especially as the danger of losing one’s car was imminent. Besides, all of our stuff was in the car, so if the boat should tip, we would be swimming around a mountain lake in the middle of Pakistan with no stuff, no car and no way out. 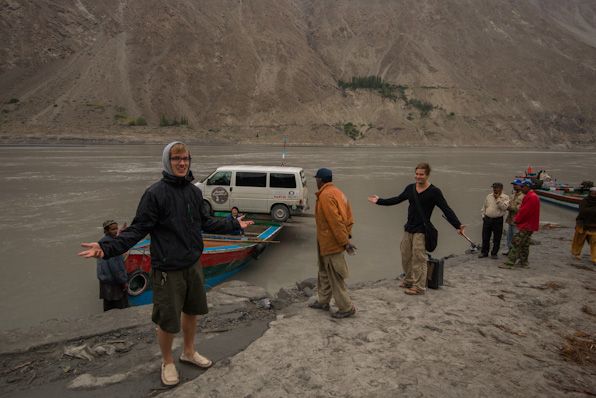 It’s hard to describe our feelings while loading the car, because we were completely baffled by the situation. The only thing we could do was to gasp for air in bewilderment. This was one way of doing things. The three of us just wondered whether this could actually happen like this.

The boys quickly measured the distance between tires with a thread, put the planks on their places, tied them to the boat and the boat to the shore – and then told us to drive on the planks. 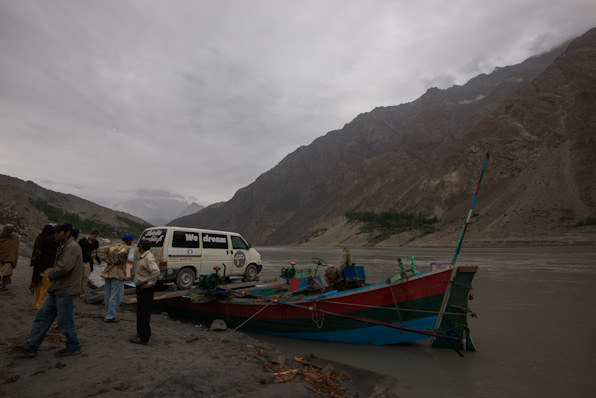 I drove slower than I’d ever driven. I felt that even Heffalump felt dizzy with the idea. It was aware that it couldn’t swim. Suddenly I was in the middle of the boat and the locals told me to stop. Loading complete, successfully.

The 17 mile boat ride took a little over an hour. By that time we’d grown accustomed to the situation, although the loose engines smoked and made more noise than all of the mean-tempered battleaxes in Finland combined. For a while we even enjoyed it. 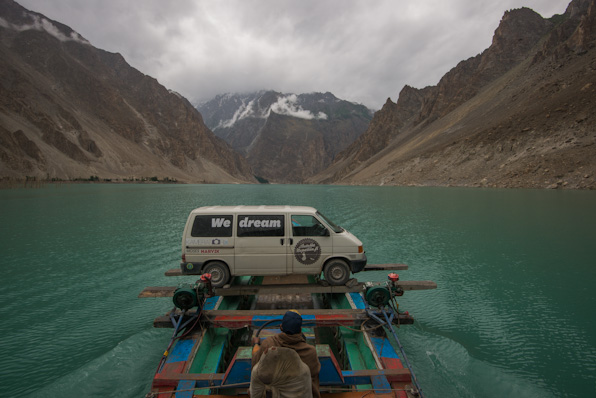 Then we saw the finish line. Two boats waited there and the cars of the Italians were still on top of them. Chinese road workers had blocked the soft sand road, which climbed along the bank, with a crane truck and a crazy pile of soft landmass. We had to wait for the crane to finish its work – along with three other boats in the stony shore. 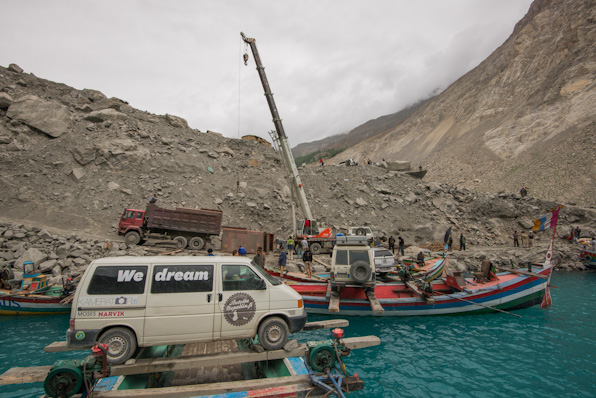 In itself the stony shore was a frightful sight. The planks was supposed to be positioned somewhere there and after driving from the planks the cars needed to creep up the bank. The bank had six inch ledges, eight inch cracks and all sorts of other rough patches. So it was highly likely that the floor pan of the car would stick to the ground – especially as that is exactly what happened to the Italians AWD ahead of us did. Would we get caught and would our downfall be the steep left-hand turn which we would have to take right after the planks? And what if the rear wheels would fall off the planks if I’d have to turn too early? 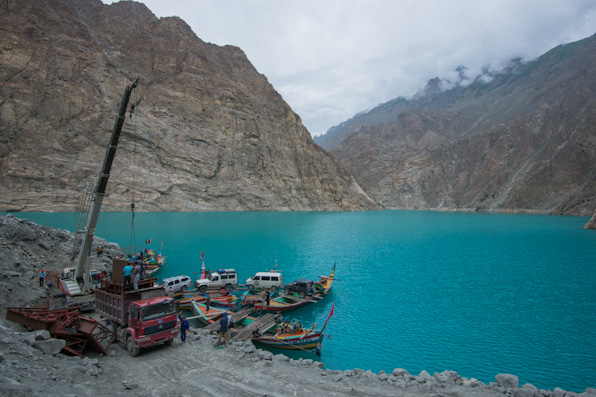 Did we make it to the shore, and if we did with how big a damage? You’ll find out as our Facebook page has over 10.000 likes!