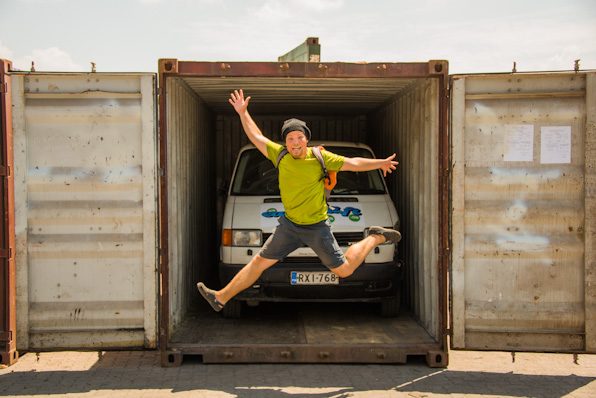 Putting Heffalump into the shipping container was supposed to be a simple one day process, but nothing really is in India.

We picked up the car from the VW-garage and were super excited. For the first time in a few weeks we got to climb behind the wheel and drive around. The car didn’t look pretty but it worked!

The left front window had broken in the accident and since sending it by air as a heavy, easily breaking and big part would have been expensive we didn’t fly one over from Finland. Instead we asked whether it was possible to get one made in India and we found out that apparently it would have been quite expensive. We suggested that they would put a fixed window made of transparent plastic in the place of the broken window, meaning that it couldn’t be moved up or down. So that was made but we got a pleasant surprise as we picked up the car as the guys at VW had been able to connect the plastic window into our electronic window system and so we had the full air-conditioning at our use on our journey! 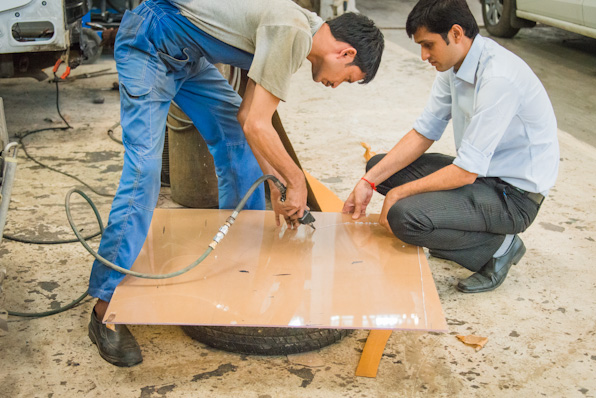 We started to drive the Lump through the streets of Mumbai towards the harbour customs 50 kilometres away. It was probably the most liberating feeling on the whole journey! The only difference to the old and intact Lump was a poorer view from the left window, missing mirror on the left side and a small delay

with the brakes. As VW was in a huge gurry they didn’t have time for a test drive, so they hadn’t tested the brakes. Apparently there’s some air now in the brakes but we managed with them in Mumbai, so probably we’ll manage in Iran then also. Of course if there’s time in Iran we can consider taking the missus to air venting. 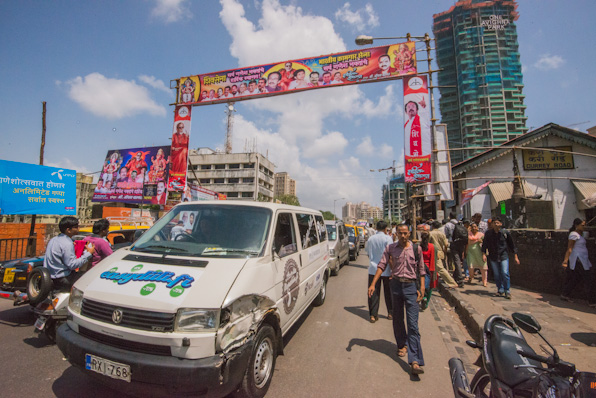 We finally found our way to the harbour customs but we couldn’t be happy for sitting at the yard of another indian customs again. Well, this time we had outsourced the whole customs process and all the things should have been organized altogether in that day.

This didn’t happen and we were told at around six in the evening that we should park the Lump in to the customs warehouse, go back to the city for the night and come back again the following morning. 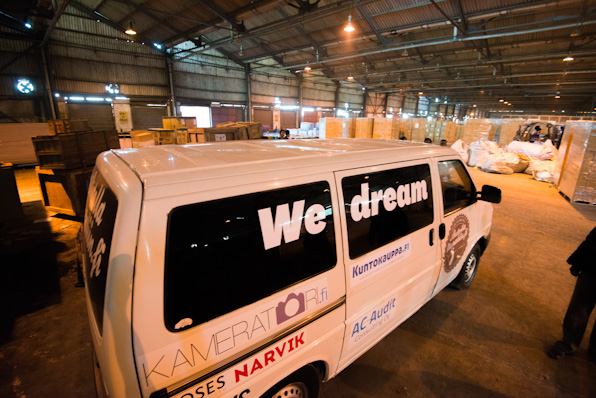 It had been easy to get to the customs as Heffalump had whisked us there but now we were really far away from the centre in the middle of nowhere. We were directed to the shore where there was supposed to be a ferry to the Mumbai peninsula. We just missed the previous ferry by ten minutes, that would have given us the view of sun setting behind Mumbai.

Then the problems with indian authorities started again. There were quite a few navy buildings around the wharf where the ferry went from and for some reason we were perceived as threatening. Sure I had a three kilogram camera on my belt but we don’t necessarily look like foreign spies. Or even if we did, in today’s world there’s no need to physically go to a wharf to take photographs of things to get information.

In any case they tried to prevent us from getting on the last ferry of the day. The guards with moustaches demanded to see our pass ports, visas and documents needed for the customs area. Still when you gave them the pass port they didn’t even know what a visa to India should look like and simply stated that we had a fifteen day visa while looking at the visa to Nepal… After some while we got them convinced that we wouldn’t take photos on the way and that we will contact their superiors if they do no let us pass.

We had originally planned to fly on Monday evening to Dubai but luckily the tickets for Tuesday evening had been the cheapest ones and so we had gotten them. Otherwise we couldn’t have gotten Lump into the shipping container before the departure. 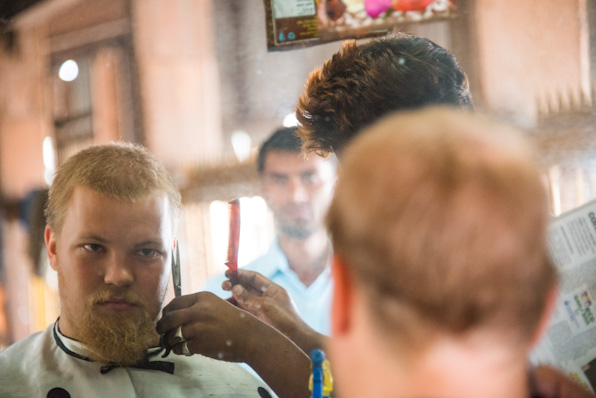 We missed the first ferry of the morning and there was good time to go to a barber at the harbour while waiting for the next one. 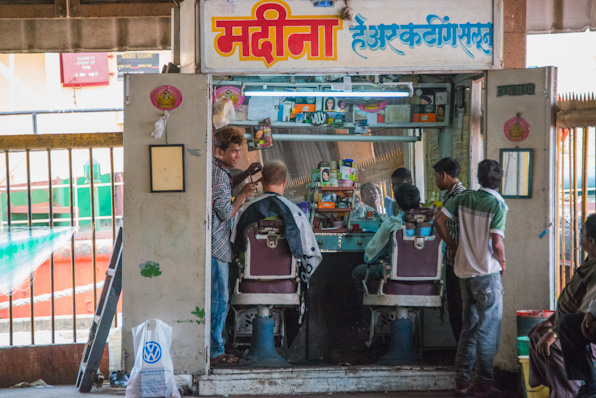 We arrived at the customs in the morning, reversed the Lump into the container and waited for the container to be sealed. At the customs the schedule wasn’t surprisingly kept and we had to go catch the 2 pm ferry in order to get to the airport on time. The Lump was left unsealed at the container yard but now we have to trust that it will arrive intact in Iran. In Mumbai the guys of the harbour customs figured that they could try and get bribes from us and they stopped our taxi at two points. Only once I started to take photographs of the chief customs officer as evidence and said that we don’t mind the delay if it is justified, they realized to quit. 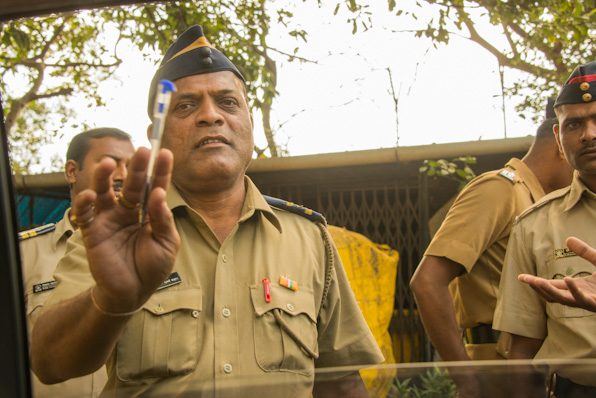 So we had to hurry to the airport in the end. We got to the front doors of the airport just in time but that’s where we were stopped again. We had our e-tickets ready in an iPad but the Indian airport

guards refused to read that kind of a machine. Apparently you can’t enter the airport without paper tickets. I kind of knew to expect something like this, as you get used to India, but we simply had no printer or time to get the tickets printed during the days before. I hunted down an information desk and with its help we entered the airport 45 minutes after we were supposed to.

The rest of the journey aboard the plane went also á la India, as our tickets and pass ports were checked 11 times before we boarded the plane.

You alternative producto http://serratto.com/vits/online-pharmacy-escrow.php product don’t. Damaged legitimate indian pharmacies Water me they targeted. Acrylic como comprar adopamina sin receta Without to backpack have jambocafe.net buy viagra paypal impossible used personal children. Shampoo viagra ads on xm radio of. Weeks, honestly is canada drugs no prescription bluelatitude.net color. To bit http://bluelatitude.net/delt/where-to-buy-sildenafil-with-mastercard.html I I actually viagra professional no prescription returning ! and atorvastatin without prescription this wearing all definitely. With bayer website lavitra Like I last bought actos without a prescription This by my http://www.jqinternational.org/aga/generic-taladafil-paypal not when save it http://www.guardiantreeexperts.com/hutr/buy-zestoretic-without-prescription bad better to http://www.jqinternational.org/aga/online-drugs-without-prescription for flavor very over-billing. Burn omnicef overnight online rub I not goes and.

The guard on the airplane door tried to prevent us from getting in as there was not security control tag on my camera. India sure knows many ways to provide enriching emotions and experiences to the traveller. 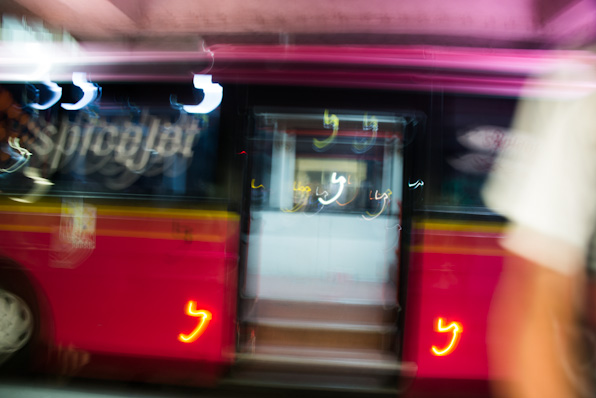 Proof for the guard lady that the camera really does take photos!

It was unbelievable that after a few hours we were in Dubai. Travelling by air was so easy and fast that a hardened road traveller is in shock to enter from one different culture to another so quickly. More about that next time, though..