Yesterday I promised that I’ll tell you today about all the things that have happened so far. It’s difficult to put the month long planning into one blog post but I’ll give you some high lights.

Let’s begin with the idea. About a year ago Juho Leppänen started dreaming of driving to Nepal, to buy a big pile of jewelry. The idea would be to bring it back to Finland by car, sell it and give the proceedings to the poor people of Nepal. And now we’re going to make this dream a reality!

Juho’s parents have been doing development cooperation in Nepal for a long time now, and Juho has also visited there often. This has helped tremendously in planning the journey. Juho is vacationing in Europe until the end of next week so I don’t have all the details of the journey. 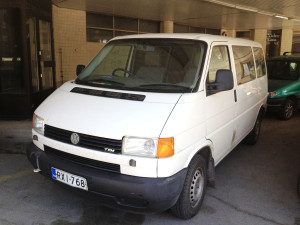 This will be our vehicle on our 20 000km journey through Asia.

Our ride
The car we’ll be driving is a former postal van from Finnish postal service Itella. It’s a 2.5 liter turbo diesel, with the steering wheel on the wrong side and with a pedometer reading of approximately 250 000 km. We need to still install at least two seats in the car, so that three drivers and a guide, who will join us in China, can all travel in it. Additionally we’re going to get the car properly serviced. 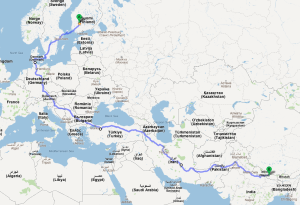 This was our route plan no. 1. We had to, however, change it due to some unrests in Southern Pakistan.

Choosing the route
Still a month ago we were planning on taking the southern route. We weren’t really sure how good an idea it would be to drive through Iran, though. Then a month ago we had to forget about this route when we started hearing more and more bad news from this southern route option.

Initially we liked this route because it would have gone through so many different countries but pretty soon we understood that it was no longer a realistic option. Now the plan is to drive a more direct northern route through Russia, Kazakhstan, Kirgizia, China, Pakistan and India. The slightly restless Pakistan is still part of our route, but we will cross its northern parts so we shouldn’t run into any bigger unrest.

The country that caused us the most planning challenges is China. It is still a communist state and we need to drive across it with a guide. Additionally we have to get Chinese driver’s licenses, to be able to drive there. That’s why the drive across the country will cost us approximately 1500e per one direction. These links will show you the exact route plan: 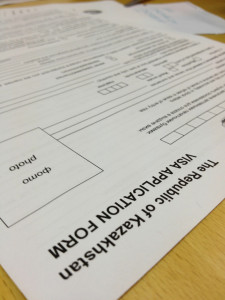 It’s been a hassle to get all the necessary visa’s. Here’s a picture of the visa application for Kazakhstan.

Many visas
Getting all the visas has been a challenging process. Juho, Rico and Misa will probably get their visas on time, but we may need to improvise a little bit to get mine. Less than a month ago I married a wonderful woman, and because of our honeymoon I couldn’t submit my passport for the visa process. When I got back from the honeymoon, we immediately sent my passport to the officials. We’re still not sure whether I’ll get my visa for Pakistan on time.

Last week Finnish postal service Itella told us that my passport had gone missing somewhere between Tampere and Helsinki. Partly to blame for this may be that Juho sent the passport to Helsinki with some packages from his company. The passport was sent as a package, even though it really was a letter. Last Friday I left an application with the Tampere police for a dual passport because there wasn’t enough time to take my passport to all the necessary embassies. My second passport got ready today. Misa went to get it. Misa and Rico have been responsible for the passports in Helsinki while Juho has been gone. We’ll see whether we need to have my missing passport annulled and whether I need to apply for one more passport. Hopefully the missing one will be found soon.

So the father of the idea Juho is on vacation at the moment. Before he left, I tried to learn as much as I could about what had happened while I was on honeymoon. Yesterday we published the blog and the Plan video. We have a lot to add with the blog still and also a lot of work to do in building the online store for the jewelry. But this was a short recap of the situation so far.