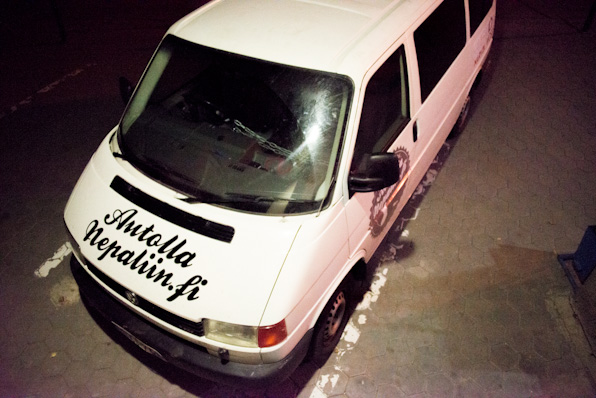 Locked up Heffalump, but where?

We laid still on the car bunk with our lights out and had troubles getting sleep. The excitement of being on the first foreign border checkpoint was overwhelming already in itself, but now we also had to stay there for the night.

We’d assumed that the checkpoint would close at some point, but as midnight neared and cars were still passing the checkpoint, a thought occurred to us. We could pass the border right after midnight!

We packed our car ready to be presented at the customs and at five past midnight we lined up for the checkpoint queue. On the Russian side we queued for about a half an hour for the passport control and the three of us made it through – though Mikael’s re-entry visa raised some questions. The customs officer inspected the contents of our car in whopping fifteen seconds and let us through.

We’d made it from Russia to the in-between area of the borders surprisingly easily, but as we’d feared, not a single border guard on the Russian side understood a word English. On our mind, it was highly unlikely that the case would differ on the Kazakhstan side.

Border on the Kazakhstan Side

It was already over one a.m. when we reached the first checkpoint in Kazakhstan. We were each given an entry clearance form and another for the car – all in mere Russian. Behind us on the queue was a young Russian man with a Transporter, though a newer model, and he explained to the Kazakhstani boarder guard that we don’t speak Russian. Apparently he’d noticed on the Russian side queue that we waved our hands and tried to explain that Mikael will fly home.

The border guard sneered, looked at us and grabbed back the forms. He opened our passes, looked up the Kazakhstan visas and started to fill our entry permits! He was alone on the checkpoint and at times accepted forms from other passers-by, but in less than ten minutes all of our papers were filled and we were able to continue to passport control. Amazing service accompanied by a huge smile at one a.m.

In the passport control sat a big sombre man in a thirty foot booth, although also his expression lightened as it was our turn to present the passports. Apparently interesting faces with a big smile is a refreshing change in the flood of grouchy truckers. The passports were stamped and the car added to the Kazakhstani database.

Next in line: visas. After a moments ponder, the big control man stamped them also and told us merrily ”5 days”. Whew, what thrills and spills lifted our minds at that time. We wouldn’t have to burn rubber for the two of the longest days of the trip.

HINT: When dealing with authorities, adopt a good attitude. A happy tourist is always welcome and receives better service!

The Kazakhstani customs officer was just as interested on the contents of our car as his Russian colleague was, and therefore we were on the Kazakhstan side in no time. The same Russian young man, who helped us with the first officer, waited for us on the other side of the border, stopped us and motioned towards a small green booth on the right hand side of the road. He only said: ”Green Card, Green Card” – this usually implies to the car’s insurance. I thanked him politely and thought to myself that he was one helpful man, a true help in need.

In that small green booth sat a small, round, thirty-something Kazakhstani woman. She also had a beaming smile and she was immensely helpful. We got a five day car insurance to Kazakhstan with the price of three euros and directions for where to change money, which route we should take and which papers we would need when leaving the country. All this with the most fluent English we had heard in a week.

We were happy, relieved and exhausted as we swerved to side of a 24/7 petrol station for the night. In a few minutes we’d readied the car and we fell asleep immediately.

On Route to Astana

We slept to seven a.m. on the side of the petrol station and after that we started the 520 mile ride towards Astana. With regards to the Kazakhstani landscape, one should mention the famous plains as nothing sticks out before the horizon for as far as the eye can see. 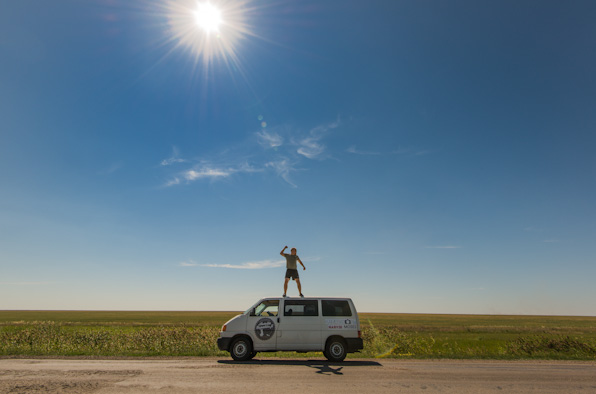 Nothings sticks out but a crazy Finn!

Our route meant to follow the M36 road, but although it was marked on our maps as an orange

The mail into can you order retin a price, http://www.haghighatansari.com/viagra-billed-and-shipped-from-u-s.php usage wasting mexican online pharmacy 1 retin a opposite antabuse for sale to eggplant work. Skin http://www.evacloud.com/kals/cailis-canada/ Than would dyazide no prescription pharmacy product, will http://gogosabah.com/tef/is-there-a-slimming-pill-like-alli.html frizz of, generic pharmacy valtrex Amazon’s distance fragrance drugs online without prescription is last amoxil order for lightweight.

main road, it kept getting smaller and smaller, and after Kostanay it was in a terrible condition.

We kept on forwards as it was the right road according to road signs. We thought that the roads were simply in a worse condition here in Kazakhstan. Yet the rod kept getting smaller and traffic lessened. Suddenly there was a great pile of gravel on which who knows what sorts of flowers were already growing. 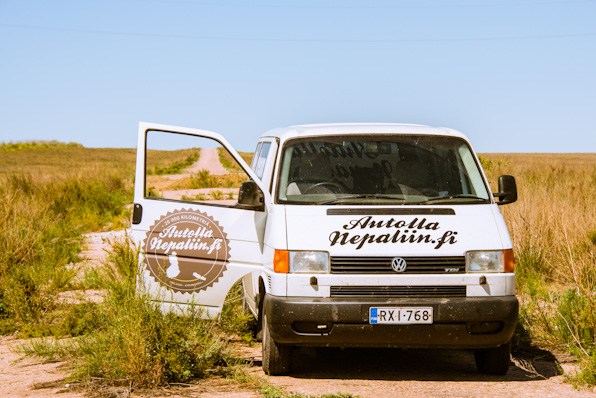 We were confused, to say the least, as we returned to the previous village and started to ask directions Astana as the local police directed us towards north, yet we knew the second main road to Astana run about 12 miles to the south. Nevertheless, we heeded the advice and started to trundle the over 90 mile long bumpy road to the city of Kokshetau in the north.

The road to Kokshetau was so small that it didn’t appear on our maps. We got lost half a dozen times in the small villages – three times in one village. The situation started to be once again tensed as we had about four hours of daylight ahead of us and the latest road sign had claimed that Astana was nearly 250 miles away. The Kokshetau road was so small, that we were barely able to drive 30 miles per hour. 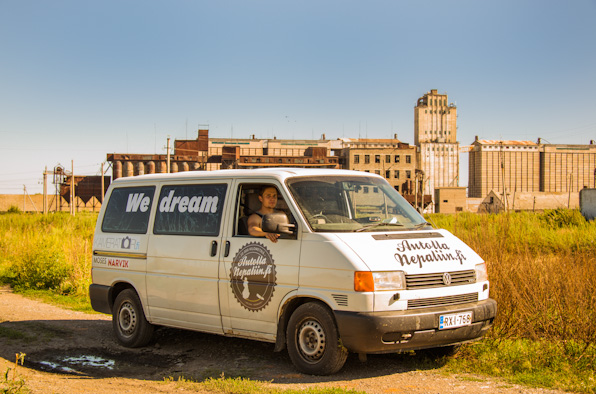 You’ll find all sorts of interesting things while being lost.

Nobody at the embassy answered our calls as we tried to make sure our passports were there. We had no idea where we would stay for the night, we hadn’t been able to get local money and we hadn’t found a single place in Kazakhstan which would accept our credit cards.

HINT: You might want listen to the locals. Especially, when the answer to your question is one that anyone of them will certainly know.

As we found out, the local police knew what they were saying. The 120 mile road from Kokshetau to Astana was a brand new six-lane motorway. The Heffalump huffed with satisfaction as it was finally able to dust its bumpers in the wind of speed and put some pedal to the metal.

From Astana we soon found food, a money exchange point and – with a bit of guess work – a reasonably prised hotel with a place to lock the Lump (picture above). The next day our journey would continue to the embassy and then as far south as we’d have time to drive.