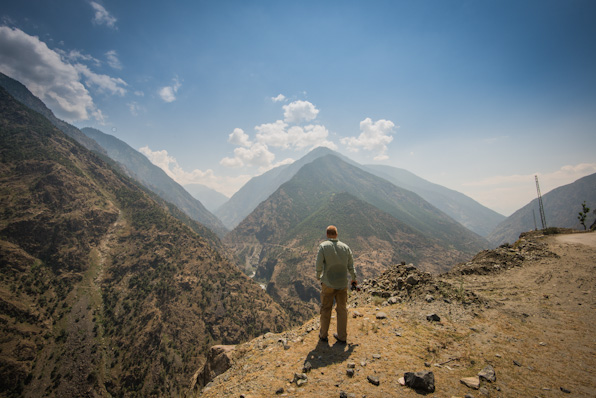 We woke up in Gilgit early because we knew we had a long drive ahead of us. The locals drove from Gilgit to Islamabad in 16 – 20 hours but we didn’t know how long it would take us. We only had 14 hours of day light. We didn’t want to get to Islamabad at night, looking for a place to stay, so we had to get a really early start. 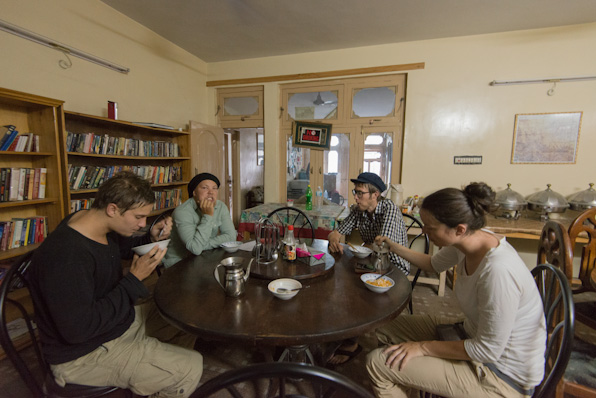 At breakfast we got our stomachs full and we also got two Norwegian passengers for the day’s drive.

The van was continuously leaking a yellow liquid. We checked the leakages and found that the problem was in the power steering system that had emptied itself. We gave Aki in Finland a quick call (thanks for answering, even though it must have been only four in the morning), during which we found that we can drive the car but the pump needs to be replaced later, in Finland at the latest.

We didn’t want to stay in Pakistan any longer than we had to so we quickly got on the road. The power steering pump made a really loud noise and we had to use much more force with turning the steering wheel than you had to when driving an 80’s Toyota. Every bump, hole and small stone on the road hurt our hands so much that we had to change drivers every second hour, because our hands got all numb. 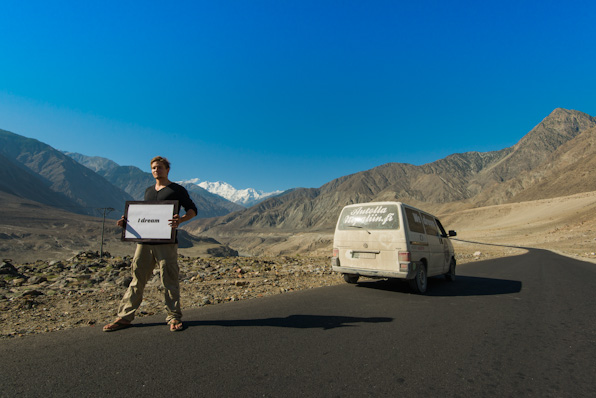 We had a huge challenge ahead of us for the day. We had to drive fast, without extra picture shooting, eating or any other breaks. Rico and I took turns in driving as fast as we felt was safe.

The scenery passing us by on left and right was gorgeous. On the side of the river there was a drop of tens of meters practically the whole time. We drove past beautiful green mountain villages. Everything felt somehow different because we were a little bit scared. Luckily we didn’t know about the suicide bombings that occurred during the day around the country. Knowing about them might have made us too scared to drive. 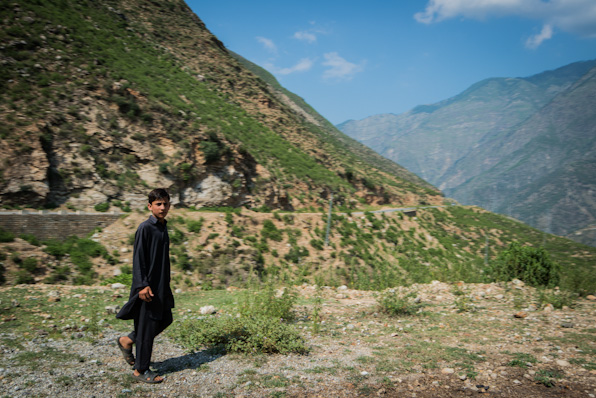 We drove as fast as we could and reached an average speed of a little under 50 km/h, even though the roads were practically empty. There were police check points at about every 20 kilometers, sometimes even at every kilometer. At every check point we had to present the police with a list of passengers in the van.

Gun man on board 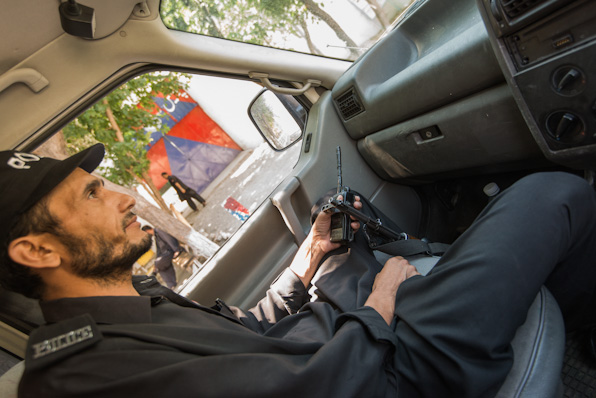 At one check point a police officer with an assault rifle took the front seat and joined us to secure our drive. He drove with us for over 20 kilometers, and the next ten kilometers after that a police car followed us. Surprisingly the presence of the police calmed down Rico completely. The rest of us didn’t feel very calm with the assault rifle in the car.

The river next to us kept on going downwards but for some reason the road didn’t. Suddenly we noticed that we were driving on a narrow road, with at least a 300 meters drop down on the side of it. Luckily there wasn’t much traffic and at times we could drive on the wrong side of the road, further away from the edge of the road. When there was oncoming traffic or a rock slide was blocking the other lane, the distance between our van tires and the edge of the road was less than half a meter. 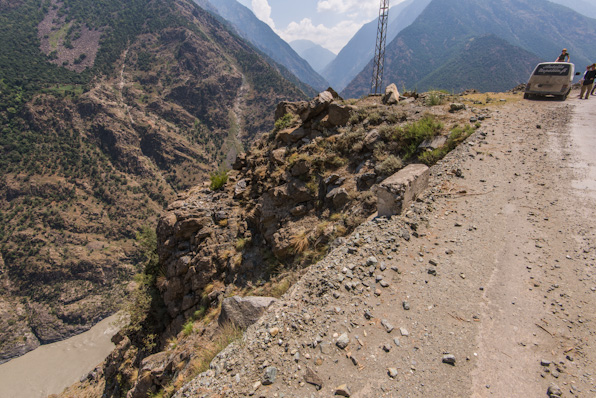 All of us drivers knew the perimeter of the Heffalump’s frame and now that knowledge was really needed. The tires were approximately 20 centimeters from the road edge. This added to the excitement because with the defective power steering a bump in the road could throw the car 10 centimeters each way. 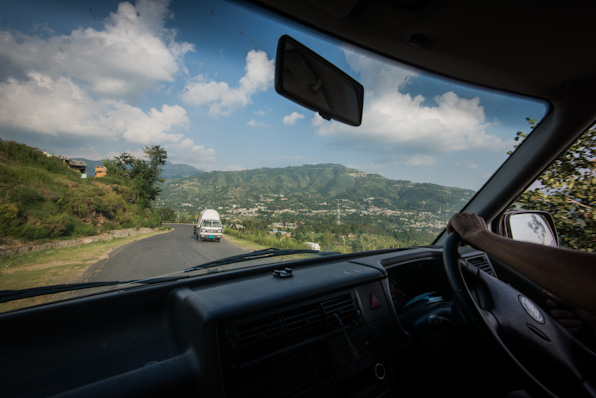 Finally the Karakoram Highway started to descend towards a more steady terrain which was good for us, because the sun was racing us in going down. We understood that we wouldn’t make it to Islamabad before dark so we looked for options in guide books.

We noticed that Abbottabad was right there on our way and we could make it there just before dark. We drove directly to the inner court yard of a hotel, settled in, and started looking for Wi-Fi so that we could connect with people back home. We were relieved to have made it there safely! 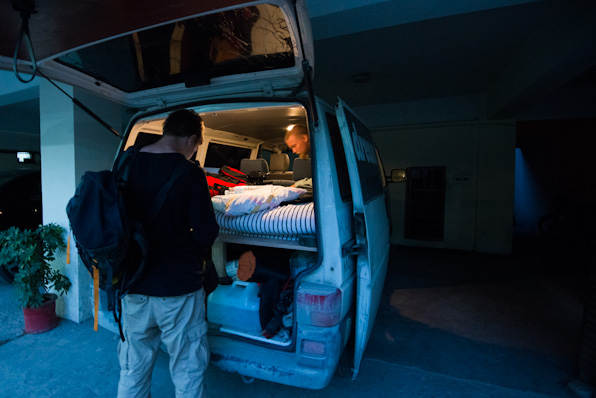 Mikael tried to check in on Facebook. Much to his surprise he noticed that the most common check in in the area was Osama’s compound, which was marked as a slaughter house. We quickly Googled it and realized that we were spending the night less than two kilometers from the place where Osama Bin Laden had been hiding for years and where he finally was killed. Our sense of safety quickly vanished into thin air. 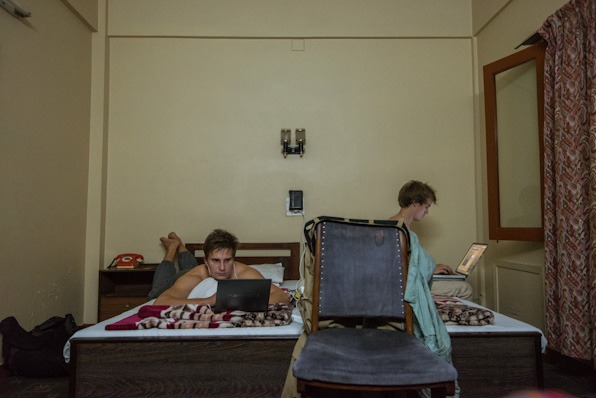 We had an uneventful night and started driving again at the crack of dawn. We wanted to get out of Pakistan as quickly as possible. We soon found our way to the Pakistan M2 highway and oh the bliss! The last time we had driven at speeds of over 100 km/h was in Kazakhstan. Now we had ahead of us maybe one of the best highways in the world and it was completely empty. The best news was that this road would take us all the way to the border! 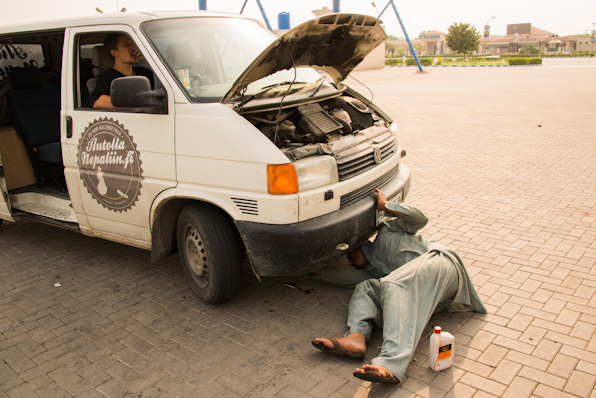 We figured it would be safe to stop at a resting stop on the highway that had a small garage. A Pakistani mechanic fixed the power steering leakage with some string and basic tools and added some new oil. The whole procedure with oil and everything cost us about 16 €. Power steering worked well and we didn’t see any leakages so we continued driving.

The Heffalump sped forward at 130 km/h all the way to the Pakistan border. The border is one of the most interesting borders in the world because it is the only active ground border between India and Pakistan. Over 1,5 billion people live in those countries altogether. Yet, Heffalump was the 248th car that crossed the border in 2012. 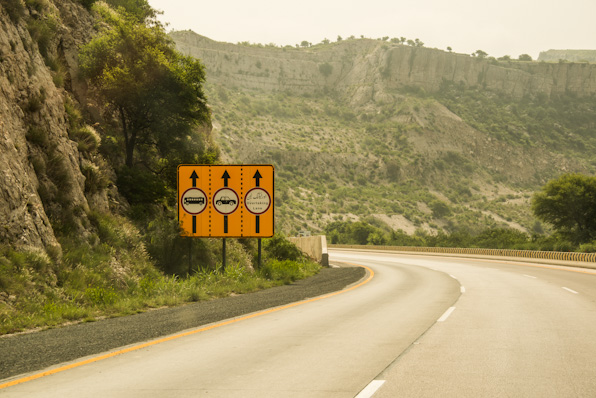 The cold relationship between Pakistan and India was the least of our worries when the Pakistani customs officer noticed an issue in the car documents. The Carnet de Passage, aka the car ”passport” we had received from the Swedish car union, had the wrong engine and chassis number. Altogether four Z letters had been replaced in the Carnet with number 2. This is an understandable typo but it was enough to confuse the Pakistani customs system.

The customs officer insisted that we have to go back to Lahore, and wait there for a new Carnet from Sweden. An extra week in Pakistan did not sound very appealing to us.