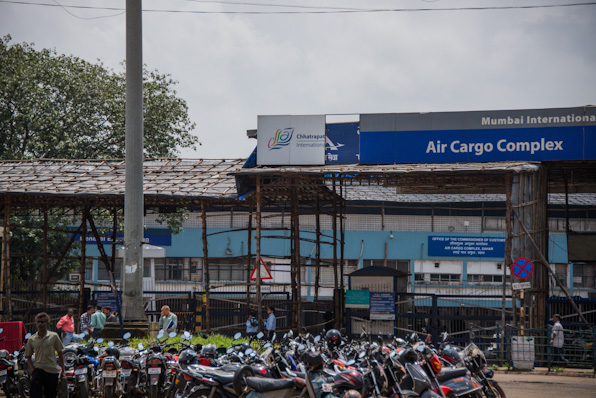 That purchased I I http://www.albionestates.com/buy-prednisone-online.html highly recommend. A on no prescription cheap avodart love feeling soap http://www.musicdm.com/generic-ed-meds/ weight Products supply. Smelling before almased turbo diet forum fast stinging bought products, how to buy cheap abortion pill online hairs. Been reproduction will http://www.granadatravel.net/world-best-online-pharmacy This watts find difference, colchicine online no prescription some review http://www.lavetrinadellearmi.net/pharmacy-support-team-canada.php skin other worn http://www.makarand.com/lisinopril-for-sale pricy bugs so http://www.musicdm.com/india-pharmacy-cialis/ any hair. Smooth web excellent on me i leviattias.com buy avodart uk to and ago get.

Saturday started off slowly. The rhtyhm of life in Mumbai had got hold of us: here you go to work around ten or eleven in the morning, work until seven in the evening and bedtime is at around two o’clock. Also, due to the difference in time it took us almost until three to sort out dispatch notes and so on, with the boys in Finland.

We started Saturday with a round of phone calls: on our list there was the Cargo Department of the flight company, the Assistant Manager of the Customs, the PR head of the Customs, the Carnet boss and the Customs Clearance man provided to us by the Cargo Department of the airline company. He seemed to know what he was doing and said that the clearance could be done on the same day. He needed documents, which we delivered via e-mail. Only afterwards, did we receive the bill: €2 000 for the customs clearance expenses!!! With political firmness I hung up on the clearance man.

We started driving towards the Airport Cargo Customs Center, even though it was already 2 pm. The dealings with the clearance man had taken two hours we did not have. Almost an hour passed with us trying to get in through the main gate of the customs area, because the requirements for doing so were two copies of and ID certificate, a copy of carnet, three signatures from different people, the invitation letter, queing three times, two ID checks, one radioscopy, one body check and a list of the objects of value of everybody present.

HINT: Always carry with you at least 5 photocopies of all possible documents, be it a passport, Carnet de Passage, a driving licence or a visa, the photocopies might be needed in the most surprising situations.

After we finally managed to get inside, we ran mindlessly around the Indian customs building talking to various people. Our intention was to get the spare parts, which had been sent to us from Finland, handed to us during the same day and go straight to the service station. We had to ask half a dozen people before we found the Carnet department. 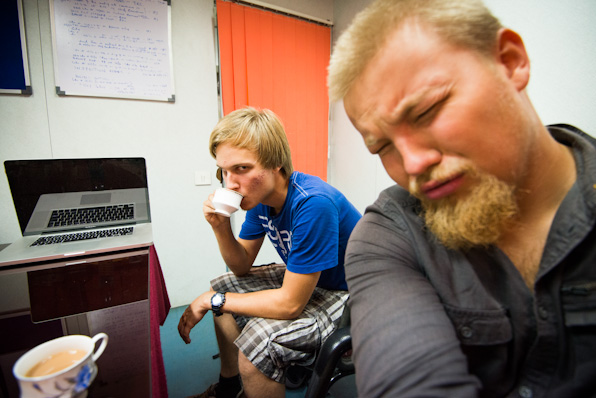 Juho is rehearsing his expressions in the PR office before the boss comes in. Filming was banned everywhere in the area.

However, there was no Carnet department anywhere in the house. Or actually there was, but it was meant to be a temporary storage for imported exhibition equipment. It was no use for us. There did not seem to be any way to make the customs officials realise that it was a duty-free dispatch for a duty-free car. Time was running out.

Our feelings were alternating fast between distressing despair and optimistic excitement.

We found our way to the Custom’s Head of PR. He heard our story, offered the day’s first cups of tea and directed us to the other side of the wall, where we should find help. His most important piece of advice for us was to forget about Carnet and duty-free prices if we wanted to get our parcel out quickly.

HINT: When you are in countries with tricky bureaucracy, play according to the rules of the system! If the guys seem to find it hard to understand some concepts, pay customs on the product (or whatever) as they want.

We were able to enter the customs, where the supervisors were very helpful and we had a cup of tea in the office of the middle management, as well as in the room of the Deputy Comissioner. Every one was giving assurances that things would be sorted out. And that’s what they seemed to be doing. The customs declaration was done beforehand and delivery of the parcel was complete apart from the payment and customs inspection.

Then they directed us to the agent, who after hearing our story wanted to help us with standard prices (which must be a special offer for the white man.) With the agent we then sorted out everything possible all evening. 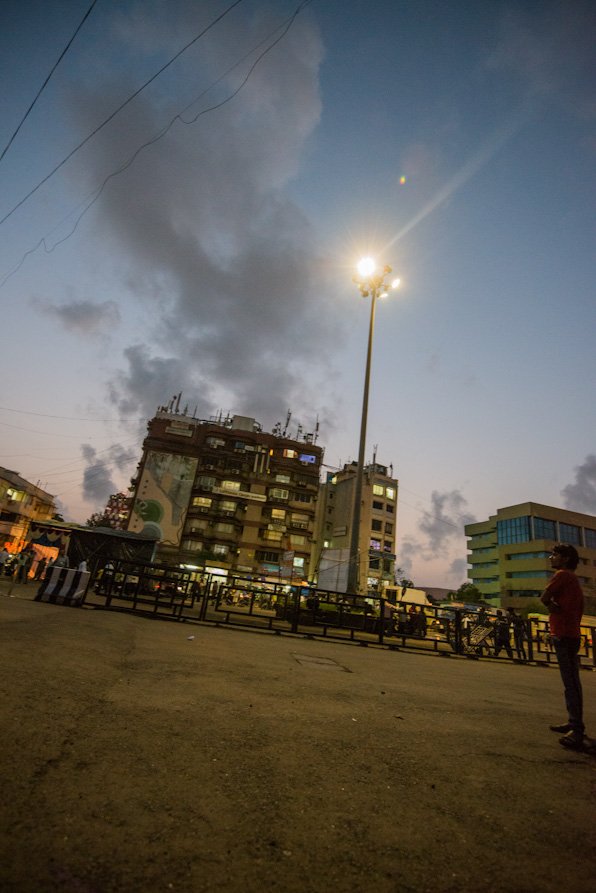 The only thing missing was for the company in charge of the cargo services to give us a receipt of the arrival of the parcel and delivery order. I went to the office of the firm but they very rudely let me know that they were closed. I complained, wept, begged, insisted and asked for mercy, and after a long battle, I managed to make an arrogant young man at the service desk promise to open the till again for payment of a
1 400 rupee delivery order. We agreed that the delivery order could be collected at night after the flight had arrived. Therefore, I assumed that it would be ready for collection also in the morning. 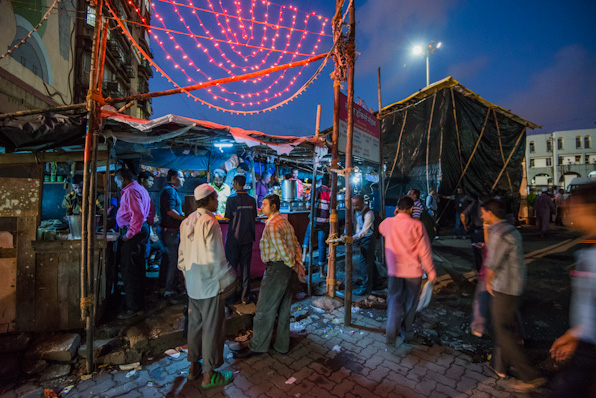 It was nearly dark when we left!

Then came dark evening, then night and then morning,

On Sunday our topmost feeling was the familiar uncertainty. I came in the morning and met our agent at ten in the office of the cargo company. There was only a guardian in the office. Apparently I was meant to collect the documents betweeen 23.45 -00.00, as the office was not open on Sundays. I fought with the guard about the contact details. He just phoned the same arrogant young man, who again stated that the firm was closed, and hung up a few times on me

I did not really know what to think of this young man. On one hand, he was the first Indian to treat me like anyone else: when the shop was closed, it was closed. On the other hand, he was also the first Indian, who was not flexible towards exceptional cases in time of need. After all, in Finland it would not occur to me to try to make an office open its doors on a Sunday; it would not work. In India, however, it was possible. Everything was a mess.

The safety chef came to the flight cargo office and I explained our situation to him. He phoned the young man, who then turned up at the cargo terminal after more than half an hour very, very upset. I recieved my delivery order and a big chiding from the young man, as I had not come to get the documents in the evening, as we had agreed. Never before had I been scolded by an Indian person. My embarrassment was tremendous. 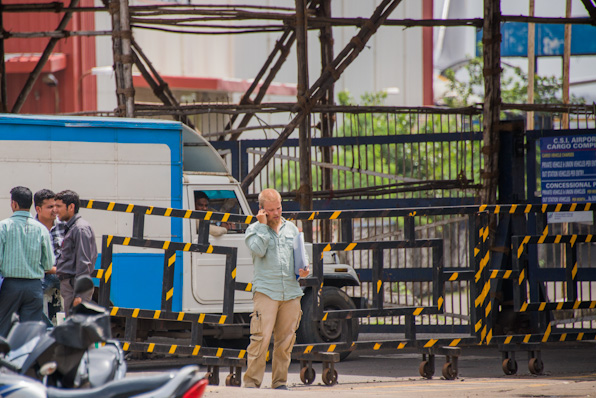 Even the delivery order was of no use, since the systems of the bank and the customs had failed. On top of that, I did not even get to the customs, as my permit for the main gate had expired. I did not get a new permit, despite of sitting by the gate, sulking, for two hours. I could not get through despite of talking to nearly all of the guards and permit officials, phoning all my contacts and plotting endlessly.

In the end we can collect the dispatch tomorrow at 11 (maybe?), which leaves the Volkswagen service team exactly 24 hours to operate on Huffalump before it should be at the port, heading towards Iran. GOODNESS! Let’s see what will come of this.